Well, we have finally got around to judging the Caption Competition!  We had a surge of late entries in te last 24 hours, some of which I have to say were of a very hig quality.  All in all, we had in excess of 30 entries so the Competition Sub-Commttee had their work cut out chosing a winner.   But finally, after long deliberation, we chose the following entry:

“How did anyone ever think we would be nice covered in chocolate and put in a lunchbox!”

Congratulations to our winner, Brian Donnelly from Dublin.  Brian wins a selection of high quality prizes, including a furry (king) penguin and a six pack of Penguin chocolate bars.  Well done Brian.

Second and third prizes went respectivelly to the following entries:

“You bitch, they ARE my shoes.”

Obviously, eveyone had their favourite and no doubt the selections of the Competition Sub-Committee will provoke debate and maybe even a little controversy.  However, we leave the enties on site for your continued enjoyment.

The competition is now closed but feel free to suggest new captions nonetheless.  We very much enjoy reading them.

We have had quite a few entries to our Caption Competition and they are still coming in. We are publishing below some of the best received to date. We have not set a closing date as yet so keep them coming.

More than one entry per person is allowed – as you will see below we have one multipe entry already!

We also have one entry to date from one of the Fearless Four themselves (not surprsingly, it happens to be my favourite up to now).

Entries should be submitted by way of comment on this Page. They will of course be moderated.

We may or may not offer a prize to the winner. It will be something worth owning, I can assure you!

The picture we have chosen is the one below of two King penguins deep in conversation not realising they can be overheard! Good luck everyone. 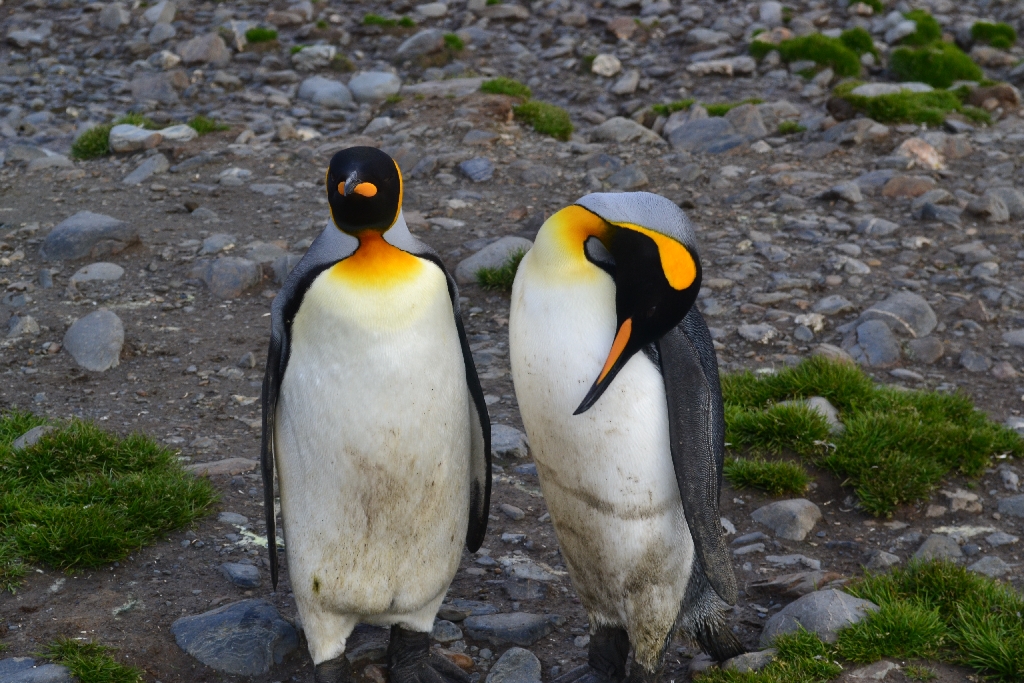 Wife (on the left): “Darling, I read recently that, as it is the first part of the foetus that develops, we all start life as an asshole; some just never get over it!! We all suffer with neck problems, so no I’m not taking you to the hospital because you think yours is broken.”

“There was no need to hit me that hard, I only said I love the way your belly sags because it hides the size of your feet!”

“You bitch, they ARE my shoes.”

“I swear to God yer man Gerry said they were introducing property tax in Ireland so we may give up on the idea of moving there!!!”

“If you think for one second you’re in with a chance in that dirty state you can forget it!!!”

“How can they be HAPPY FEET when they’re so dirty?”

“It’s really hard to tell the boys from the girls”

“Do you know what?  I think it’s upsidedown!”

“You have to see it from my point of view – and believe me it’s not pretty!”

“How did anyone ever think we would be nice covered in chocolate and put in a lunchbox!”

“Elvis, why do they all sing that p p pick up a penguin song?
I don’t even know what a penguin is!”

“You’ve some neck coming home in that state”

“I told you to go easy on those muscle relaxing drugs.”

“Believe me Rory just adjust your head position a little more and you will be able to hit those Nike clubs. Ok Tiger but I’m not 100% sure.”

“Is that an egg you have there, or are you just pleased to see me?”

“Can you smell that”. “Are you kidding the sound of it nearly knocked my head off”

“No, I think you need to place your feet a bit wider if you’re going to do an Elvis impression”

“Hey has anyone got a Difene; Cyril has twisted his neck. I knew no good would come of performing tricks for those bloody tourists off the Fram”

“There goes another lot..will you miss them?”
“Yeah …but won’t it be nice to have the place back to ourselves for a while… me neck is killing me from posing for all those photos!”

“Does my bum look big in this?”

Penguin on the left: ‘Why won’t they take lots of nice pictures of us Penny’
Penguin on the right: ‘Cos we’ve egg on our faces and mud on our boots Gwyn’

“Yeh! our jackets are nice but I would really like one of those blue ones!”

“For goodness sake Tarquin, stop sulking. Your not the only one not to spot a Rock Hopper.”

“I’m not listening to your excuses.”

“I’m a little embarrassed, I don’t want to harrass, as both of us are dirty, I won’t bother flirting but if I am in with a chance, maybe you will give me a dance!”