I first became interested in Antarctica as a result of reading Alfred Lansing’s 1960’s account of Sir Ernest Shackleton’s epic Endurance expedition about which you can read more on other pages of this Blog.  From that time on I was hooked.  I read everything I could lay my hands on on the subject of Antarctica and all the great explorers of the heroic age, including Scott, Crean, Mawson, Amundsen and others.

Visiting Antarctica, however, was something I only began to consider seriously about 5 years or so ago.  The practicalities of visiting such a remote location are considerable and and a good deal of advance planning is required.  Along with other members of the Fearless Four, I missed out as a result of failed efforts to book a voyage for the 2010, 2011 and 2012 seasons.  Finally, in May 2011, we managed to put a deposit on an expedition due to depart in Febuary 2013,  almost 2 years distant.  And we only just made it.  The voyage was fully booked by the end of May 2011!

For something that was for so long on the horizon, it is strange now to be looking back over my shoulder as the memory recedes into the past. It is the inevitable march of time, I suppose. However, while the trip just concluded may be a memory, Antarctica is an experience that will live with each of us for the rest of our lives.  I am most often asked what the highlight was and I find that a difficult question to answer.  Certainly, the extraordinary landscape, the indescribable natural beauty of the place and the amazing wildlife were highlights. But so do were the people we met, the journey itself there and back and the very act of standing on a portion of the remotest and most inhospitable landmass on the planet; these were all highlights.  Every day of the 19 was a highlight. It was a joy to wake every morning, look excitedly through the cabin porthole and wonder what the day had in store for us.

We may have achieved our ambition but, for some of us at least, that ambition remains as strong as ever.  The desire to return is possibly stronger than was the desire to go in the first place.  I feel like a thristy man who has taken no more than a sip from a glass of ice-cold water.  I want more.

The experience lives on.

Our Shackleton Blog page has now been updated.  The Page records extracts from Shackleton’s own account of his ill-fated “Endurance expedition” between 1914 and 1917. It is one of the most famous stories of Antarctic exploration.  It is updated on a “contemporaneous” basis.

Find out who won our Caption Competition here!

Go to our Caption Competition page to see entries so far.  Still not too late to get yours in.

Our Caption Cmpetition has moved to its own page on the Blog. You will find it here

Entries will be published later today. 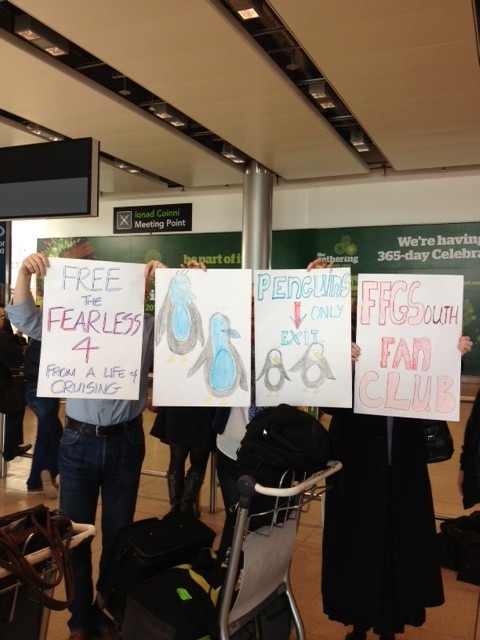 The Fearless Four arrived back safely in Dublin Aiport on Thursday 14 March to a tumultuous welcome from family, friends and wellwishers (well, family anyway!). Their long journey from Buenos Aries had been uneventful until arrival in Heathrow Terminal 5 at which point the tranfer to the Dublin flight in Terminal 1 proved something of a nighmare and, in fact, one of the greatest challenges faced by the Four in their almost month long escapade. Crowded shuttle buses, long queues for immigration, biometric testing, security, and biometric testing (again), added to all of which was the long walk to Gate 84, meant that a two hour transfer time was just long enough. The Four made their Dublin flight with minutes to spare, exhausted but happy to be on the final leg.

However, once they emerged into the arrivals hall in Dublin all those frustration were forgottenand the welcome home party began. “Delighted to be home after a memorable adventure” was the official comment on behalf of the Four.

We have had a right good giggle at some of the imaginative and creative entries to our Caption Competition (see below). Will let it run for a day or two yet so still time to get your entry in. Be aware though, the standard is high.

We will almost certainly publish some of the better efforts.

The Fram sailed into the mouth of the Rio De La Plata at about 6pm this evening but it will be 8am tomorrow before we are alongside in Buenos Aries. We had a farewell cocktail with the Captain followed by a barbeque on deck and an extraordinary sunset to bring the curtain down on a memorable voyage.

We have a final day in Buenos Aries tomorrow where the temperature is in the eighties, in stark contrast to what we have become used since leaving Ushuaia. Hoping to finally see a tango show tomorrow night before our flight back to Europe on Wednesday.

Final thoughts later when we have had time to reflect on all our experiences of the past three weeks.

Yet another important message from the Bridge just now and the umpteenth time we have been interrupted while attempting to relax and read one of the many books brought for the trip; dolphins on the bow, maybe 10 or more. Everyone jumps up, grabs cameras and rushes out on deck.

Previously it was orcas on starboard; penguins to port, king penguins astern, humpbacks ahead, fin whales at two o’ clock, rockhoppers at six, on a calm day petrels in the water, on wild, windy days petrels flying, earlier today cattle egrets way of course, and wandering albatross, port and starboard, astern and ahead allmost every day.

So you’ll understand now why no books will be read on this trip.

We got to check out the Fram’s engine room yesterday and are happy to report all seems to be in order. Deep in the bowels of the ship, it all looked a bit complicated at first but then I found a board with a few dials that looked familiar and I could see we had plenty of fuel for the rest of the journey and that we had enough oil so all well I think. Pictures coming up on Gallery page.

The Chief Engineer who showed us around has been with Fram since the first piece of steel was cut in 2007. He admits being quite attached to her. She is powered by a diesal electric system.

Under normal operating conditions only 2 engines are in use giving a max speed of 13 knots. With all four engaged maximum speed is 16.5 knots. This is very rarely necessary and the cost implications are clear. She runs on light marine oil not unlike the deisel in a car and it costs about 1 Euro a litre. The rate of fuel consumption quoted above converts to about 56 litres per mile!

A back up generator and batteries give emergency capacity in the very unlikely event of all engines being lost. The Fram can be refuelled at sea.

We also learned that during the Force 11 storm some nights ago, the autopilot was unable to maintain course and so the Captain remained on the Bridge throughout the night steering the ship manually.

All you ‘would be’ mechanics out there would love the ‘workshop’. There was any amount of tools to play with including an anvil and brick plate. And it wasn’t just the women on the tour took pictures so they could show people how a workshop could be kept. Spanners, hammers, nuts, bolts, washers, screws, rings and things unknown were all stored in size order, facing the same way (like hangers in a well kept wardrobe) and clearly labelled (in alphabetical order). Some members of The FF found that quite soothing. No chance here of finding the mechanic trawling through rusty old biscuit tins or tuppperware boxes muttering ” I’m sure I had some 6mm washers in here “!

It was an entirely reassuring experience as is the crew drill that is going on as I write.