“I need solitude.  I have come forth to this hill….to see the forms of the mountains on the horizon – to behold and commune with something grander than man”
Henry David Thoreau, Journal, August 14 1854

The opportunity to travel is truly a privilege.  It introduces us to new countries, cultures and, perhaps most importantly, people.  It affords us exciting new experiences that undoubtedly broaden the mind. Antarctica is the first time the Fearless Four  have travelled as a group and hopefully in time we will look back on our journey and recall it as one of the Great Travel Moments of our lives.  But individually, we have all had moments in the past when we have visited new places and had cause to stop and wonder at the beauty and diversity of our planet – those WOW moments when we have wished we could bottle the experience and bring it away with us.  Photography gives us just that opportunity. Bringing your camera on your travels is as important as bringing your credit card.  I am sure you have your favourite Great Travel Moments but below you will find some of ours – these photos are all our own work.  Enjoy. 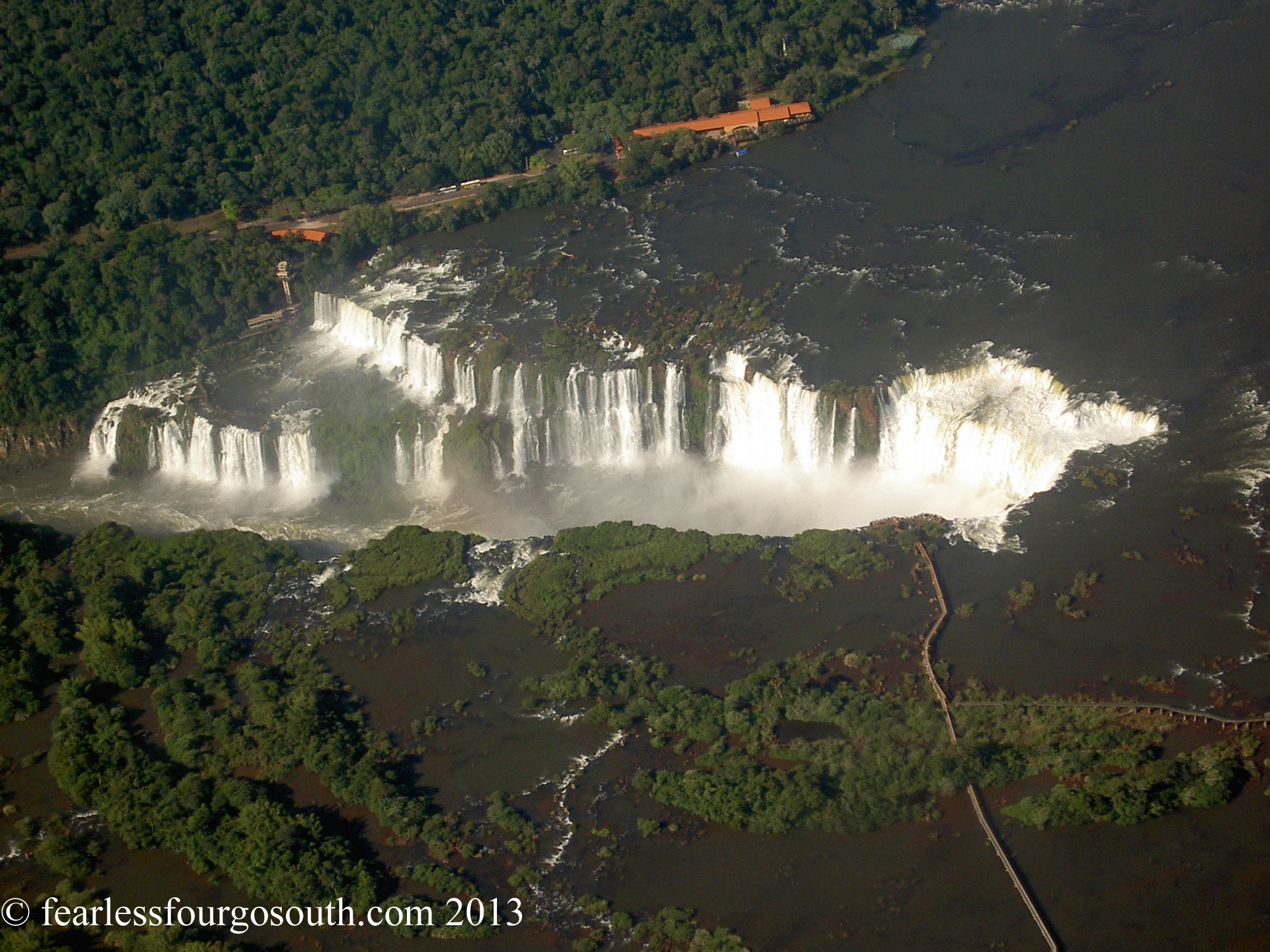 Iguazu, on the Argentina-Brazil border, should be on everybody’s “bucket list” of places to visit.  It is hard to describe but is cerainly worthy of the much abused and over-used term – awesome.  I wonder what went through the minds of the first great explorers when they stumbled across this extraordinary gift of nature.  For sure, though, they would not have had the opportunity to experience this aerial view.  This was taken through the window of the aircraft with a small compact digital camera in 2005. 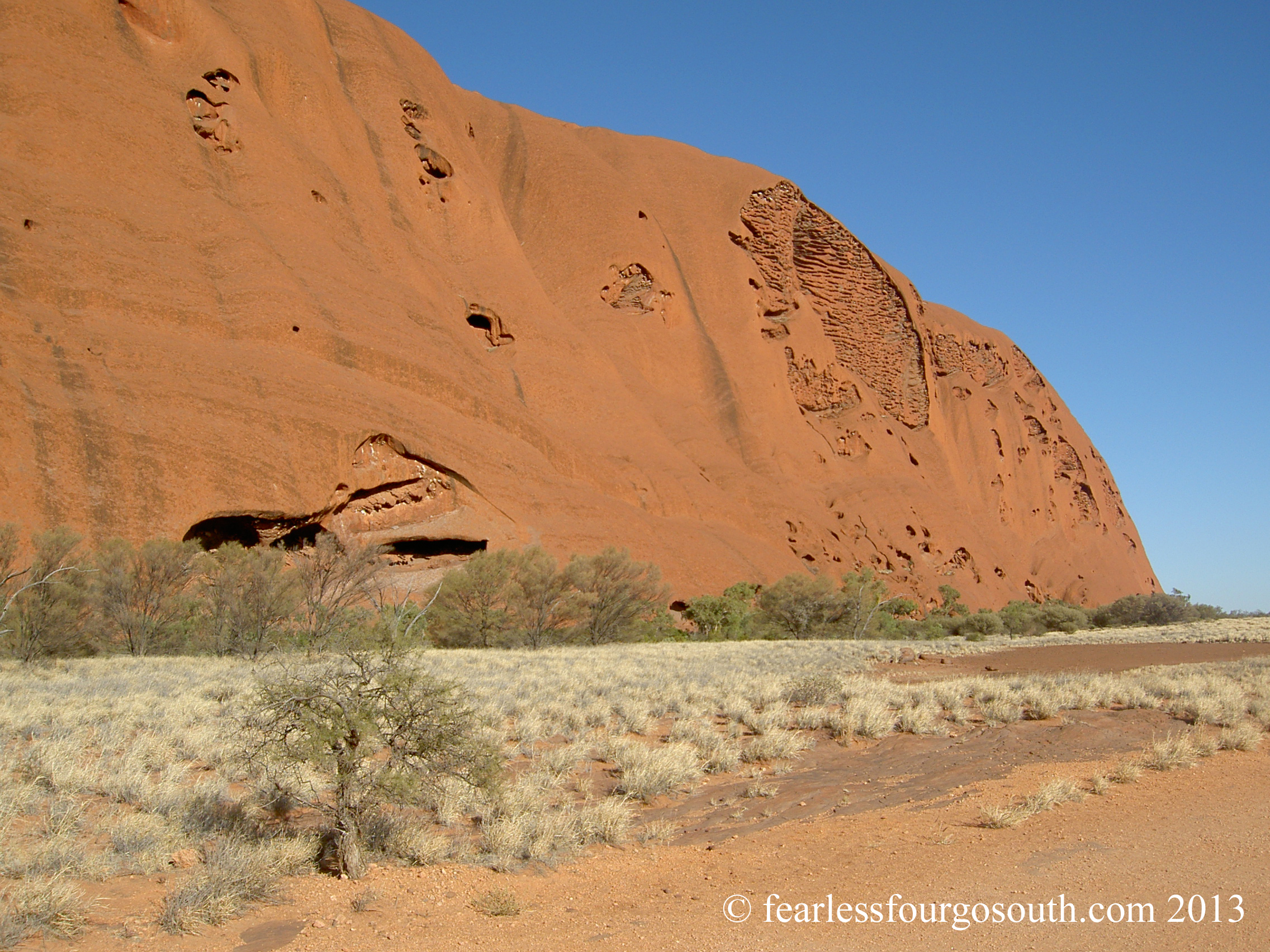 This iconic landmark may be one of the most photographed in the world but the traveller’s first glimpse is no less mind-blowing for all that.  Another “must see” for the intrepid wanderer.  This was taken early morning in April, 2006 during a 9km walk around the Rock.  One of the most memorable things about it was just how blue the sky was.  This shot has not been enhanced. 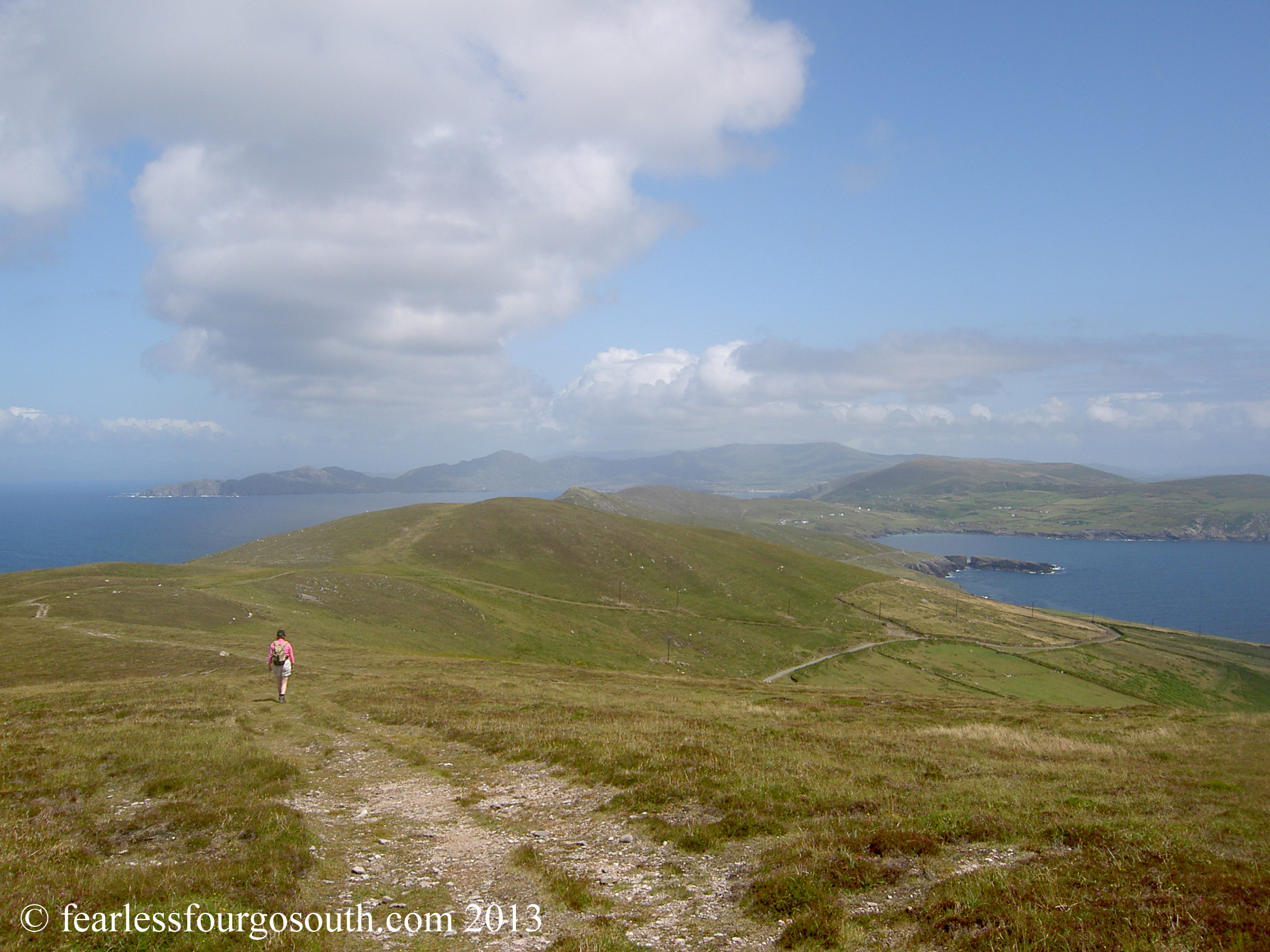 This is probably the least well known of our chosen locations.  Dursey lies just off the coast of the Beara Peninsula in the south of Ireland.  It is a four mile long spit of land that stretches out into the Atlantic Ocean and is most easily accessed by means of Ireland’s only cable car.  Stunning on a fine day as this photo from the high point of the Island demonstrates.  It has to be one of the finest pieces of coastal scenery to be found anywhere in the world (2003). 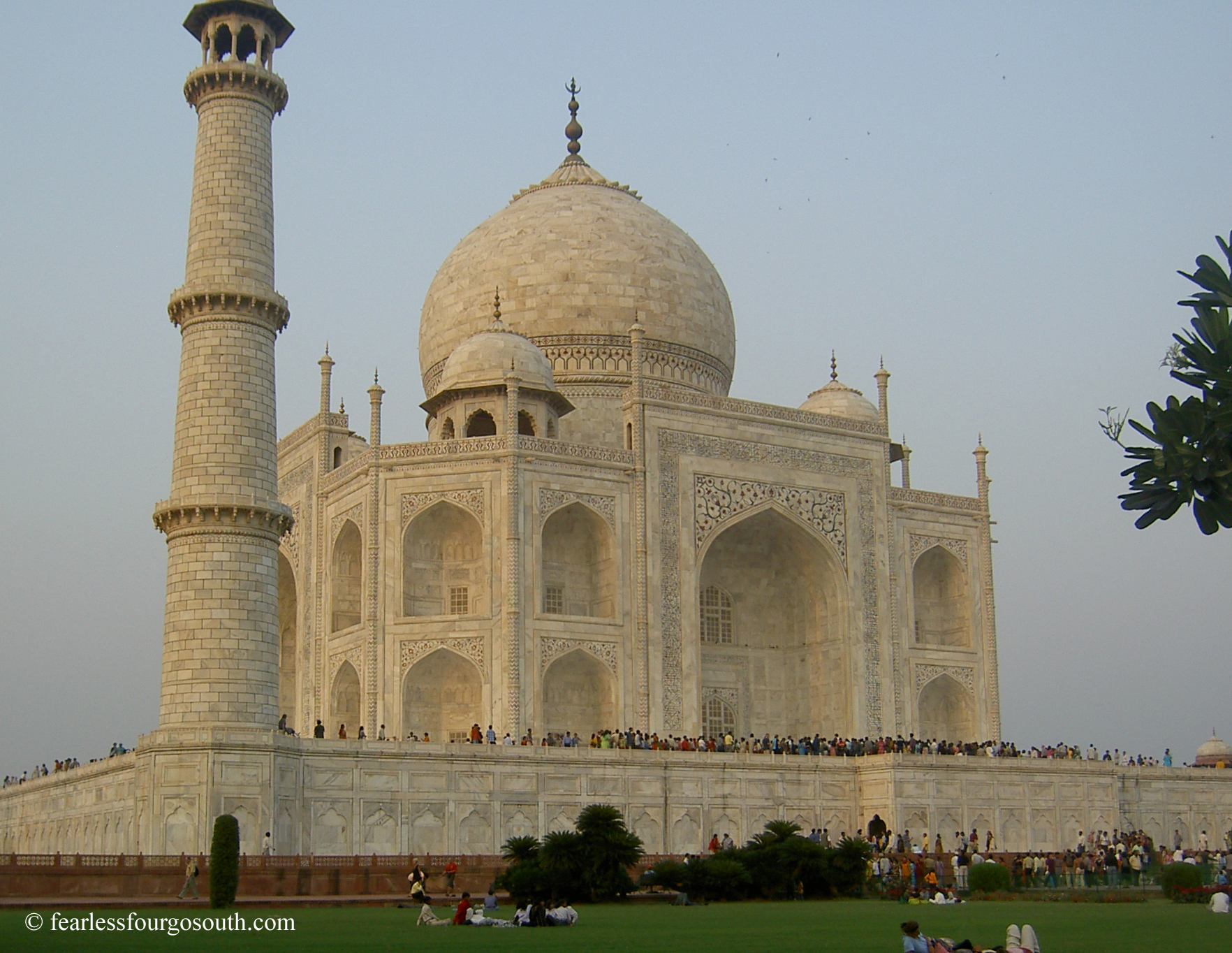 There is not much that has not already been said about this extraordinary structure.  Other than perhaps to add that no matter how many photographs you have seen, and from whatever perspective, none of them will have prepared you for your first sight of the Taj.  One of life’s original WOW moments.  This picture from 2006 was taken from a less familiar angle than is normally seen in pictures of this architectural masterpiece. 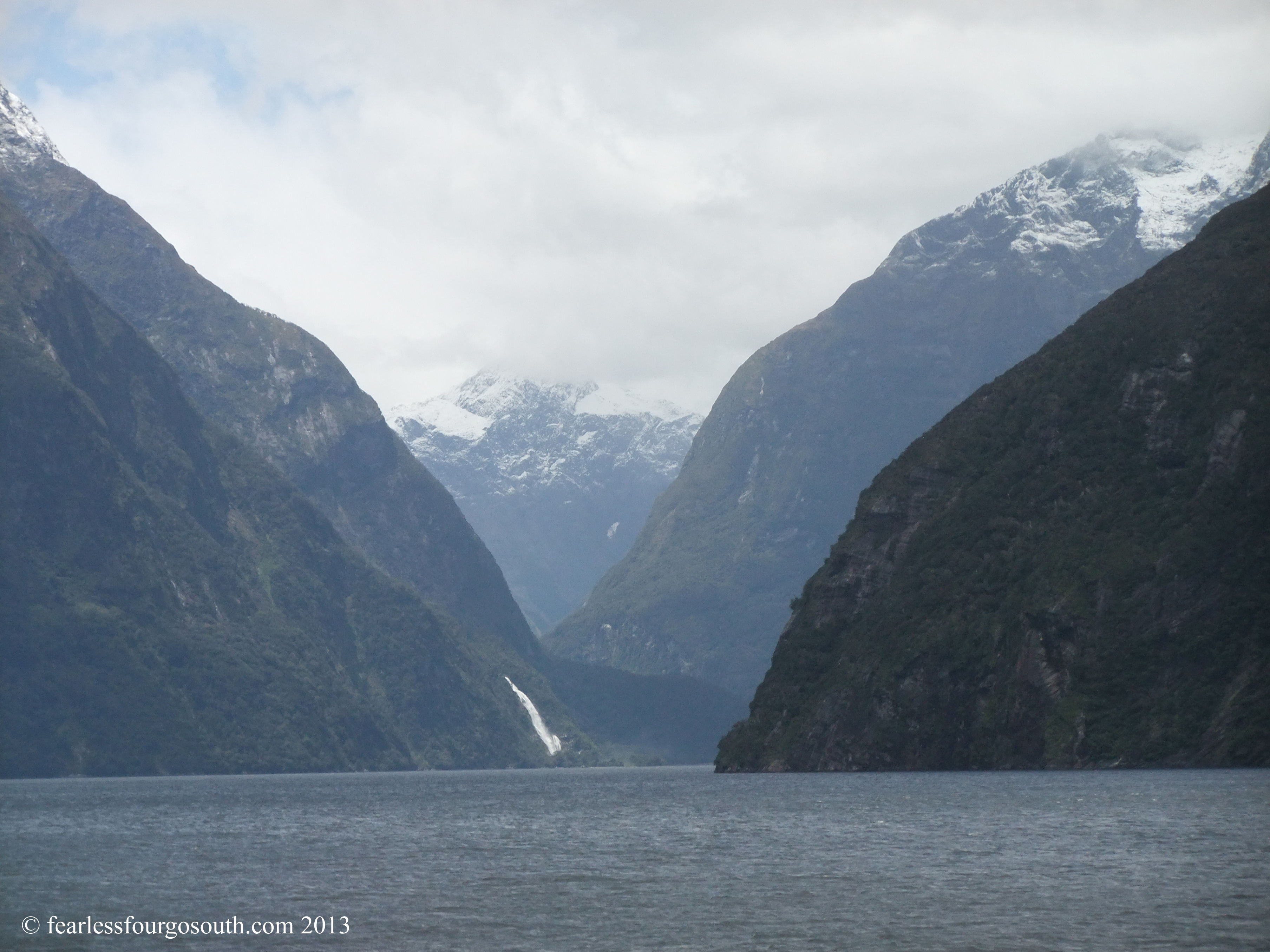 Worthy of being on everyone’s “to see” list.  Sit back, enjoy a cruise on the waters of the Sound and wonder at yet another of New Zealand’s (and the world’s) great natural phenomena. This photo was taken in 2009. 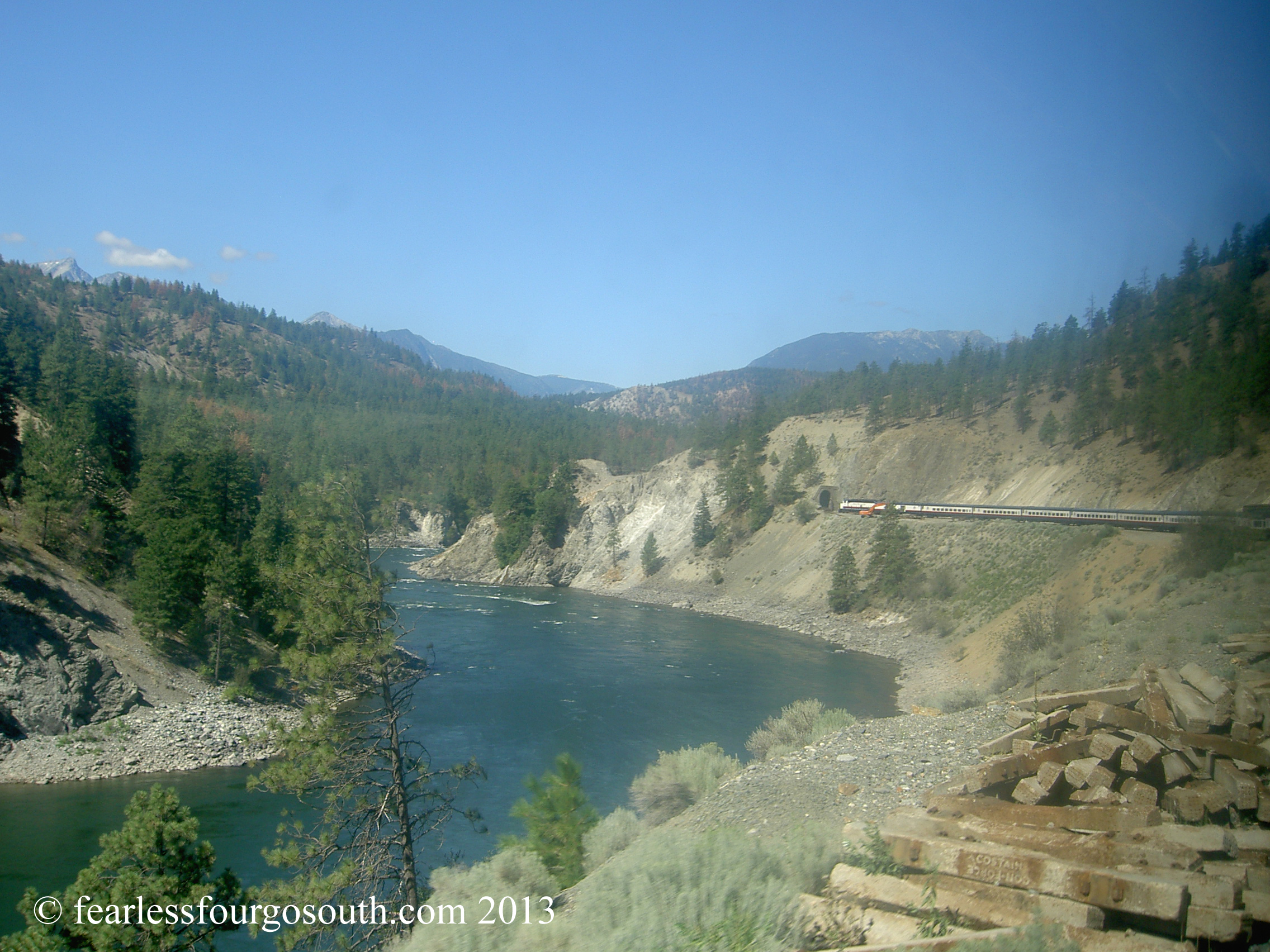 Hard to know where to start with the Rockies to tell the truth.  It is just one gob-smacking vista after another.  Certainly, for anyone considering a visit, a memorable experience is to travel on the  famous Rocky Mountaineer railway.  That’s where this shot came from in 2008, somewhere between Kamloops and Vancouver.  It was the type of day you wish would go on for ever. 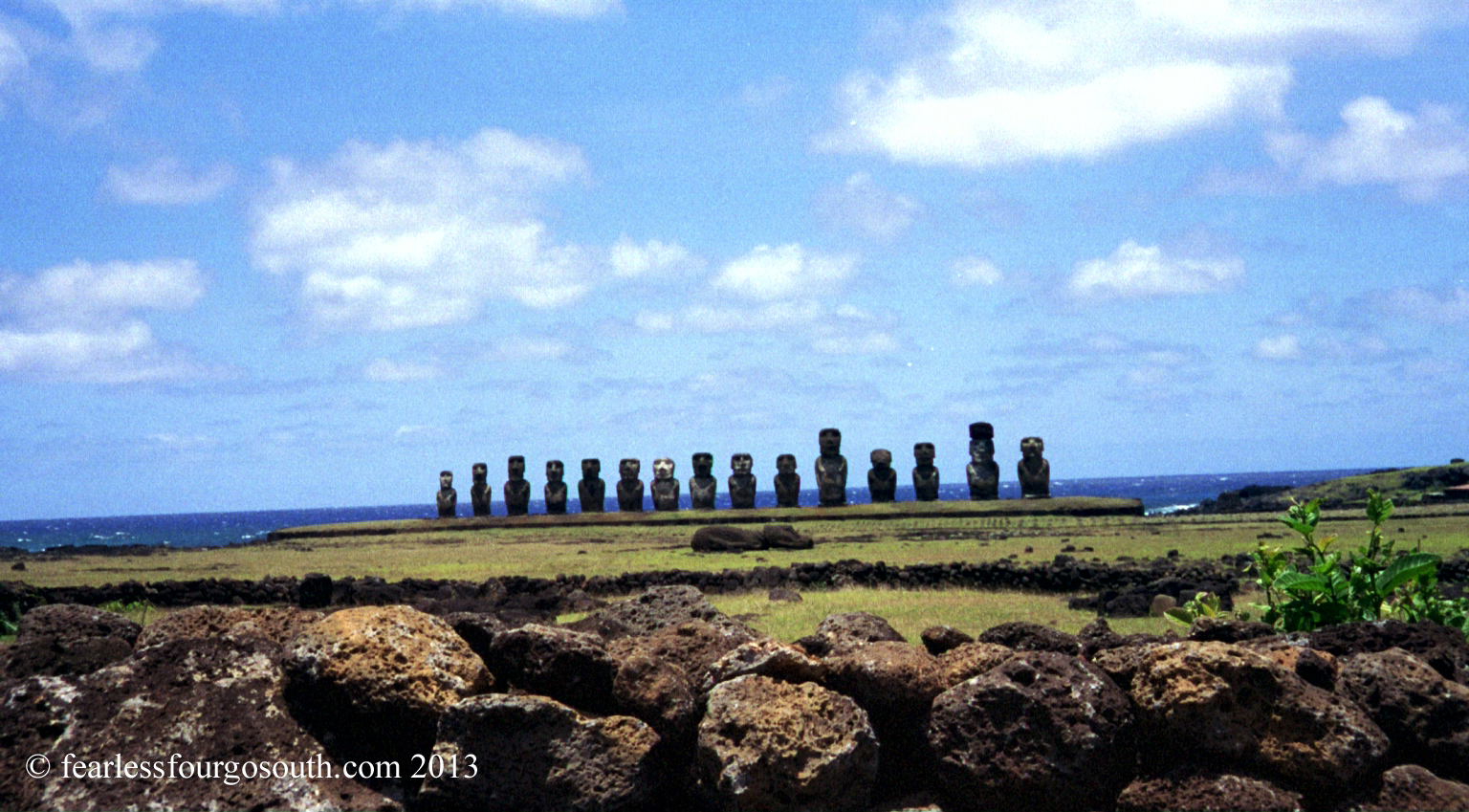 No one knows for sure just how the ancients managed to put these massive stone statues in place.  Easter Island is one of the most isolated, yet inhabited,  places on earth set adrift as it is in the South Pacific.  Not the easiest place to get to but for those who manage it, the rewards are mighty indeed. The statues were intended to last and were still there in December, 1999. 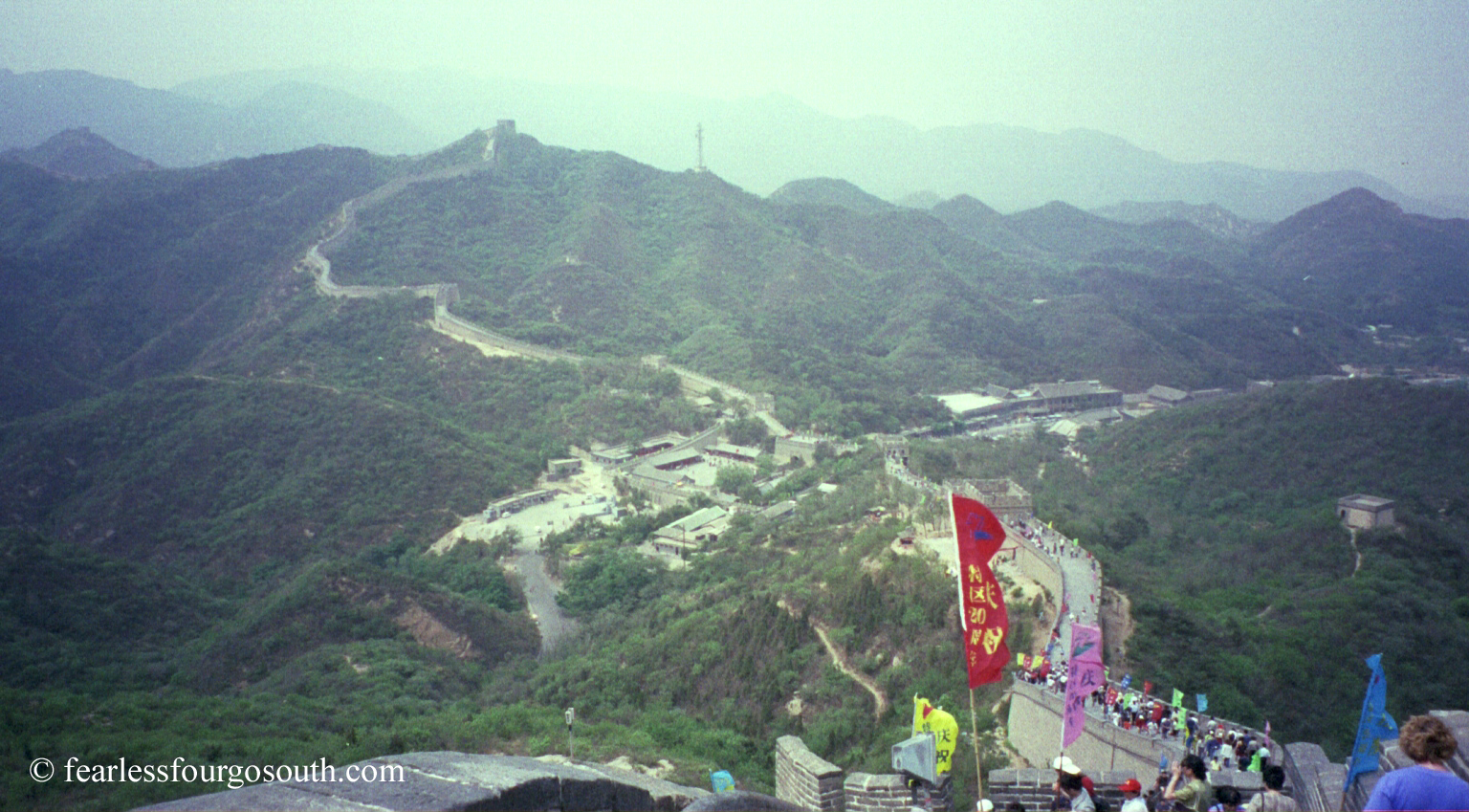 Another iconic landmark and although you will never feel isolated among the throngs of tourists, it is well worth the effort.  It is extraordinary not least for the effort that went into its construction.  This picture was taken in 2001.

The City of the Incas sits at almost 8,000 ft above sea level but is a hugely rewarding experience for those who manage to get there, particularly if you chose to hike the challenging trail to the top. (2000) 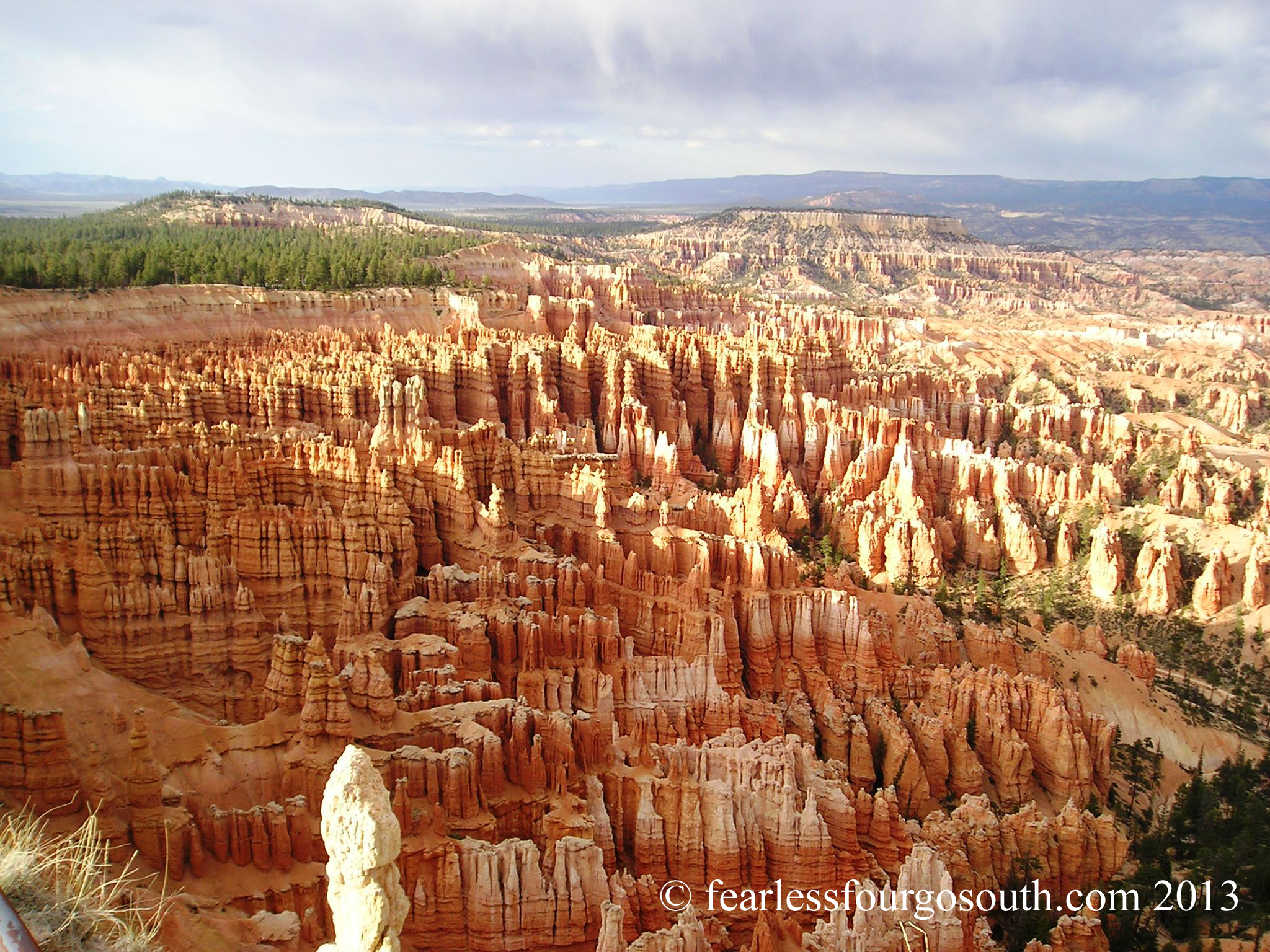 Bryce Canyon seems not to get the notice it deserves. It risks being missed out in a touring itinerary in favour of its older and very impressive geological neighbour the Grand Canyon.  The spires you see are called ‘hoodoos’ and are formed when ice and rainwater wear away weak limestone.  A walk down thorough these formations is an unforgettable experience, the scale only being really appreciated when looking up at formations and trees towering above you. And remember the elevation at the other extreme reaches 9,100ft which we reached by car (in 2004) but were in no doubt as to the altitude when  just strolling around at that height. 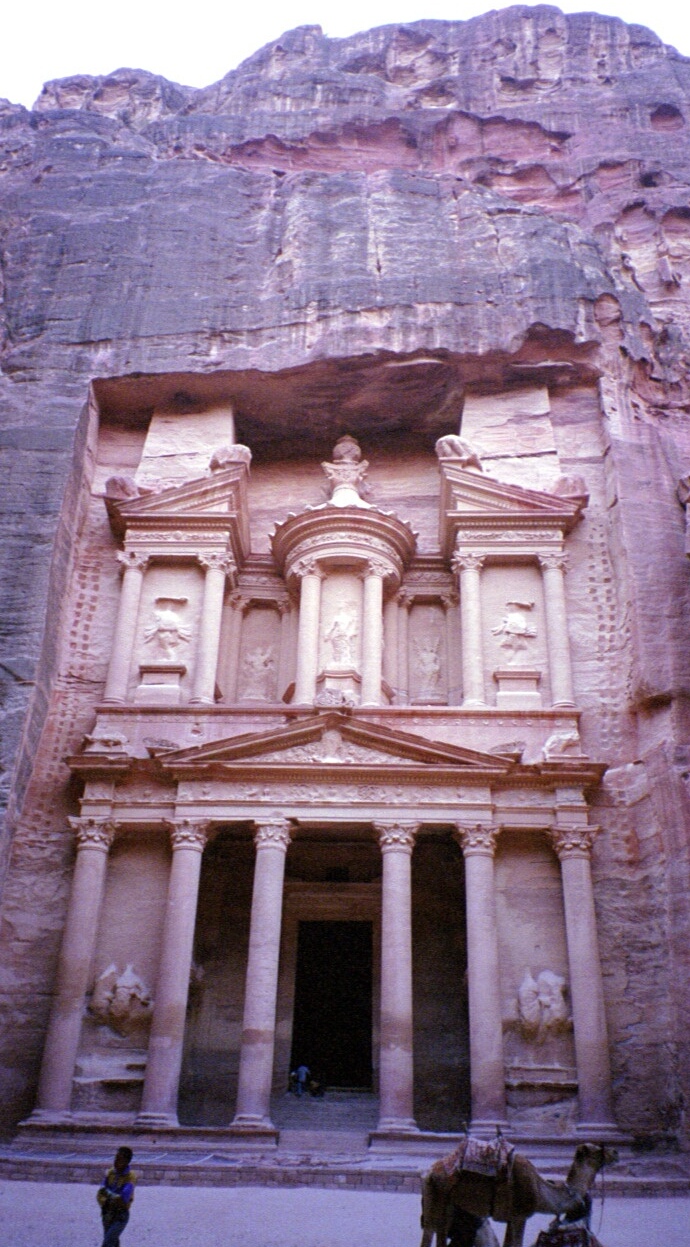 At its height — in the century or so prior to and after the birth of Christ — the Nabataean empire included parts of Jordan, Israel, Egypt, Syria and Saudi Arabia. And the seat of the kingdom was Petra, a city that the Nabataeans literally carved by hand from the rose-red cliffs of what is now southern Jordan (just north of Saudi Arabia and just west of Iraq). An extraordinary place. (2004) 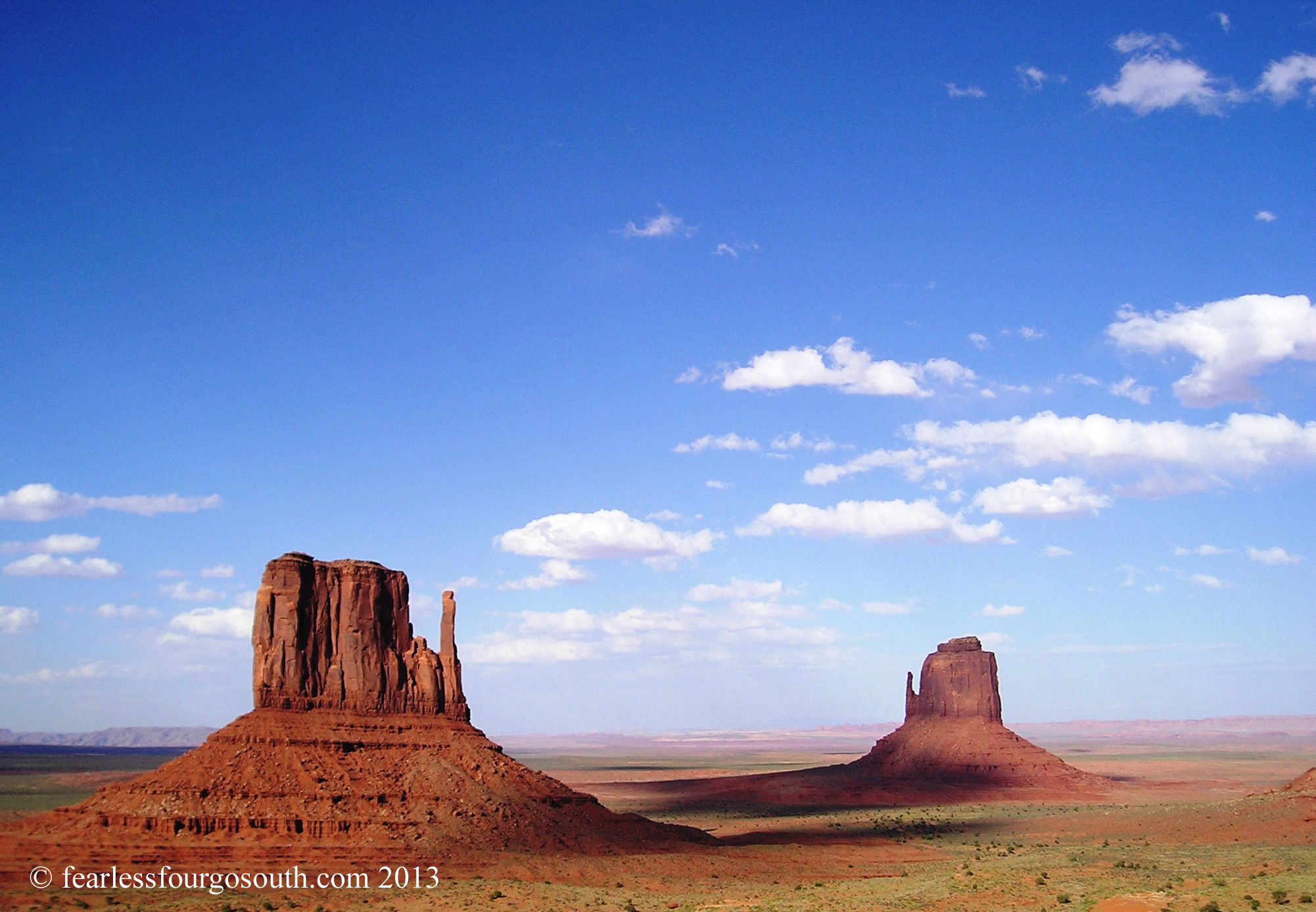 The ‘Mittens’ are just one of an amazing series of natural sculptures in the area known as Monument Valley in the Colarado Plateau.  It is part of the Navajo Tribal Park and more famous of course for the John Ford Westerns set in this location. There is a surreal feeling about this place, the vast empty desert areas punctuated by these strangely shaped buttes of sandstone. The colours are as bright as appear in this picture (also taken in 2004) and the azure blue sky is a stunning backdrop to these creations of natural forces.